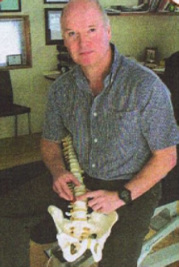 Neil completed five years training as an osteopath at the London School of Osteopathy, graduating with Honours. He also trained for three years as an acupuncturist, completing his diploma in China.

His practice in Rolleston was recently awarded the highest platinum medal for being an environmentally sustainable practice, all of which supports a healthy healing environment. Before Neil settled in New Zealand, he spent time in South Africa where he worked with the Natal Sharks rugby team. He has also worked with a number of international sporting teams, been a sports therapist at the Singapore Sevens and worked at the World Masters Games.

With his broad skill base and wealth of experience, Neil is well qualified to treat the whole family. Neil is a supervisor and examiner for the Osteopathic Council. He is also a reviewer for those osteopaths training to use Western Medical Acupuncture within osteopathy.